The poll was Should the first (well actually 2nd) Poll be Trivia or Opinion?

The Poll questions and answers where:

2. What was Lars planning on doing with his life before Metallica?
Becoming a Professional Tennis Player

Please note, the above adds to 101% due to uneven division, and the consequent rounding.

2. Do you prefer the original or present Fuel lyrics?
Present: 76%

3. Do you prefer the original or present Devil's Dance lyrics?
Present: 85%

4. Do you feel that the name "ReLoad" does the name justice or makes it sound like B-grade material?
Yes, it is a great name: 87%

*Please note that some people participated in all questions, while some participated in only 1, or only 2-4, or only 1 and 4 (no other combinations occured), so percentages from one question to the next may seem incompatible.
*Entries with more or less than 14 songs were discarded.

The Poll questions and answers were:

1. "Martini" and "My/Mine Eyes" were songs that were said to be coming on ReLoad, what happened to them?
"Martini" became "Where The Wild Things Are" and "My/Mine Eyes" became "Low Man's Lyric." Note: These two answers are (and were) both in the lyrics section. Only full answers were excepted, one song didn't count as having #1 right

2. What was special about the day that ReLoad was released in the US?
It was Kirk's birthday

3. How did "The Unforgiven II" end?
Murder. Death was also accepted, but nothing else. Note: This wasn't our opinion, this is according to Jaymz.

1. Kirk was arrested when he was 18 and 23, what was each one for? Be as specific as possible, one extra little detail may make a tie breaker.
Kirk was arrested at the 18 for theft. He stole equipment, amps and such.
He was arrested again at the age of 23 because he broke his probation to go on tour.
Don't believe us? Here's a quote of his response to the question, "Have you ever been arrested?":
"Yes, not once but twice. What for? Grand Theft. Served some time in the county jail. First time I was 18, second time I was 23. The second time was because I broke probation to go on tour. Grand theft is a theft of more than $10,000. It was one of those stupid mistakes that you make when you're 18 and drunk off your ass. We stole a bunch of musical equipment. Hey, what's a poor boy to do?
When I was in the slammer, it was so fucked-up! I was in there with a rapist and a guy who murdered his lawyer, because he found out that his lawyer was sleeping with his wife. It was a bad scene. Second time it was worse. I kept getting woken up by screams from another cell where this guy was buggering this other guy who was NOT into it..."
Note: although no one got even one of the two arrests right, we would not have accepted just one, both needed to be there.

2. What was Ron McGoveny's girlfriend's name at the time he was in Metallica?
Colleen

The Winner Was: Michelle

The Prize Was: ReLoad on vinyl

Once again, special thanks to Liz, for the questions and answers.

Note: "Other" represents those who voted on songs that got no other votes.

Note: "Other" represents those who voted on songs that got no other votes.

4. If you could request a song for Metallica to cover for Garage Inc., what would it be (Please include original artist)?
We got no songs repeated on this question, and there are too many individual songs to list, but here's the information we can provide you with:
Note: Submissions with out the original artist were not counted

5. Do you think they should eventually stop production of the new Garage Days also, or not?
Yes: 43%
No: 57%

1. Why did Lars move to America? (Be VERY specific!)
The answer we were looking for was: to join a tennis academy. However, since no one was that specific we accepted anything along the lines of to play tennis.

2. After choosing Jason Newsted as their new Bassist, Metallica played a surprise warm-up gig where, and with who else on the bill? (Must answer both parts in order to be counted as correct!)
Reseda Country Club, between Heretic and Metal Church. You did not need "Reseda" to get the first half right, only "country club." For the second half, you only needed one band.

3. This question was removed from the Contest for several reasons, most of which was that we felt it was unfair. For scoring we just pretended this question didn't exist.

4. In March of 1983, who traveled with the band to the East coast?
Mark Whitaker

5. Who was the ORIGINAL producer of AJFA?
Mike Clink

6. What is the difference between the first UK release of "The 5.98 EP, Garage Days Re-Revisited" and every other release of it?
It did not have "The Wait" on it. We did not accept "it was shorter," sorry.

The Winner Was: Erica Hahn

The Prize Was: Master of Reality, a Cliff-era bootleg from IPOM Gimp Dave's personal collection.

This poll asked what people would like to see at IPOM. Due to recent problems with copyright issues many of the options on the poll are no longer possible, and therefore the poll's results will not be posted. However we will keep them in mind.

1. After the Aardschock Festival in 1984, where did the band work on the tracks for Ride The Lightning?
We were looking for "Mercyful Fate's Rehearsal Studio in Copenhagen, Denmark," and we also took "Sweet Silence Studios, in Denmark." Answers had to have one of the titles above, and a minumum of Denmark.

2. How many siblings does Kirk have? What kind (brother/sister) is each?
Kirk has one brother, and one sister.

3. Refering to question #2, which sibling(s) (if any) are older? Younger?
Kirk's brother is older, and his sister is younger. We were impressed by a few entries that included Kirk's siblings' names: Rick and Jennifer. It is note worthy that we have not yet found anything confirming or denying these names, and entries were not awarded extra points for names based on that (and the question didn't ask for it).

4. After recording Stone Cold Crazy for Rubaiyat, Metallica rested for 4 months. Then they played dates in Europe with what 3 bands?
Dio, Bonham, and Warrior Soul.

5. Dave Mustaine's last show with Metallica was on what day of the week? Who else was on the bill?
Saturday, with Venom and Vandenberg.

The Winner Was: Erica Hahn

The Prize Was: Fuck in' Peoria, a bootleg from IPOM Gimp Dave's personal collection.

The contest was: Give a caption for the following picture. Be creative as possible, and MAKE US LAUGH! The picture is from Doug's Woodstock escapade: 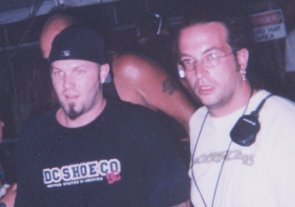 The Winner Was: Matt McKenzie

His Winning Entry Was: Wait, wait, wait... we have to suck WHAT to get stage space at woodstock?!?

The Prize Was: No Leaf Clover Pt. 3 Enhanced CD Single.

The entries were judged by the entire IPOM Staff, each entry was assigned a number, and at the end we matched the number up to find out who the winning entry belonged to.

This was the first Contest specially for the members of the IPOM Newsletter. It was only viewable by them and only enterable by them. There were the following restrictions:

The questions and answers were as follows:

1. Kirk learned he was to audition for Metallica on a very special day. What was this day?
April Fool's Day. We accepted 4/1/83 as well.

2. Where was Kirk at the moment he receieved the phone call in question 1?
On the toilet. We did NOT accept 'at home,' or 'in San Francisco' (unless you mentioned that he was on the toilet as well).

4. What veteran producer was originally hired to produce ...And Justice For All?
Mike Clink

5. What was the name of the editor from whom Lars "borrowed" the name Metallica, and what name did the editor's fanzine eventually end up being called?
Ron Quintana and Metal Mania. If you had only one or the other, you received half a point.

BONUS I. What year was IPOM formed?
1997. If you didn't get this right, shame on you, it's right in the About Us section

BONUS II. In early 1998 IPOM went offline temporarily. During this time, the newsletter was continued through Phil's girlfriend's email address. What was that email address?
For the purposes of saving her from getting tons of email, I won't post her email address, but I will tell you it had something to do with 'Valygirl.' No one got close though.

The Winner Was: Jonathan Graf. He got 6 questions correct.

The Prize Was: Imported I Disappear single with instrumental version (subject to change depending on availablity)

The questions and answers where:

1. Phil Towle's first day with the band was the same day as what other major event in Metallica history?
Jason leaving the band
(1 point)

2. In 1987, Metallica played a show in Zwolle, Holland. Who opened for them, and what is significant about that band (in relation to Metallica)?
Scrap Metal - A band made of Metallica roadies
(2 points - one for the name, one for who they were)

6. What was the working title for Carpe Diem Baby?
Skimpy
(1 point)

The prize was: So What!: The Good, The Mad, and The Ugly courtesy of Random House!

This contest was quite a change. We asked people to design a banner for IPOM. This was a chance to show off creativity. The banner did not need to be "usable" necessarily. It could have been humorous, or good, or whatever. The banner was simply a medium. The guidelines were as follows:

The winner was: Jason Harwod, and you can see his 3 banners here: one, two, and three.

The prize was: So What!: The Good, The Mad, and The Ugly courtesy of Random House!

Contest 15 was a participation contest. We asked people to submit various things to the sites, and each would get you entries into a random drawing. Here were the point values.

The winner was: Nick Jaconsen.

The prize was: Some World Magentic picks!

You can see Contest 16 details. There were 68 entries, 48 unique corrections to the site, 2 invalid entries, and 18 entries were submitted by more than one person.

We put all 66 valid entries into a random drawing you can watch here.

Our Grand Prize winner was Teki Latex who won 5 Metallica picks from Phil's personal collection and our First Prize winner was Alessandro Pasculli who won a copy of The Angry String Orchestra's Metallica cover album "Say Your Prayers".